Take a look at our list of the greatest shots in the history of the Ryder Cup.

The Ryder Cup has seen some of the greatest individual shots to ever be played given the weight of the occasion and the pressure that comes with that. In this piece we take a look at some of our favourites. Are there any we have missed?

In probably his finest moment as a professional golfer, Ian Poulter single-handidly dragged Europe back into the 2012 Ryder Cup at Medinah. Paired with Rory McIlroy and facing Zach Johnson and Jason Dufner, Poulter birdied the final five holes to win the match 1up and give Europe hope. His 15-foot putt on the last was the culmination of his heroics that day.

Europe would comeback from 10-6 down to win the Cup the next day.

As you would expect, Seve makes this list and could probably have an entire list to himself. But in 1983 he produced arguably one of the greatest shots ever against Fuzzy Zoeller. Having let a 3up lead slip away, the two were all-square going up the last and Seve proceeded to drive his ball into a fairway bunker.

With 245 yards in, a layup looked to be his only option with a steep lip on the bunker and water short of the green. But instead the mercurial Spaniard took his 3-wood out of the bag and put his ball on the green. He made par and the match was halved. Bernhard Langer said it was “the most amazing shot I have ever seen.” Jack Nicklaus also called it the finest shot he’d ever seen. Europe would lose the Cup by 14 and a half points to 13 and a half.

Proceedings were tied at eight points apiece before the Sunday singles. Europe shot out of the blocks, winning four and a half points from the first six matches. Niclas Fasth needed a point to secure victory, and was one up in his match against Paul Azinger, who was in the green-side bunker at 18. He landed his ball in the fringe and watched on as it rolled into the cup, keeping American hopes alive. 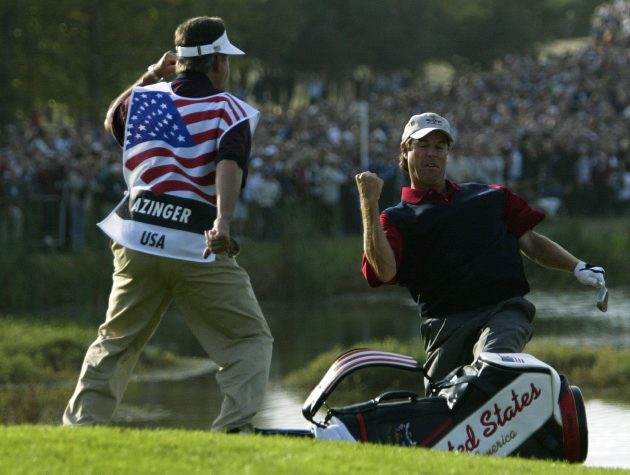 America led by two points going into the singles, and it was looking like Europe, and captain Bernard Gallacher, were heading for a third successive Ryder Cup defeat. Howard Clark still believed, and holed his tee shot at the par 3 11th in his match with Peter Jacobson, one of only six hole-in-ones in Ryder Cup history. It sparked a resurgence and Europe went on to win 14.5 – 13.5.

The 2012 Ryder Cup should have been won by the Americans. For a large proportion of the tournament they were the better team but Ian Poulter’s heroics (see shot above) on Sunday gave Europe the momentum they needed. Attention shifted to the singles and in the fourth match out, Justin Rose needed to beat Phil Mickelson. Their match headed to the 17th with Mickelson 1up but Rose then holed a 50 foot putt to make it all-square headed up the last. Rose then holed another great putt on the 18th to win the crucial match 1up. Europe would pull off an incredible comeback to win the Cup.

Eamon Darcy hadn’t recorded a single Ryder Cup point in nine attempts before his singles match with Ben Crenshaw. The match was all square after 17, despite Crenshaw breaking his putter on the sixth hole. The American holed a five-footer on the last, forcing Darcy to hole a putt of a similar length to win his first ever point. He duly knocked it in, helping Europe to a first victory on American soil. 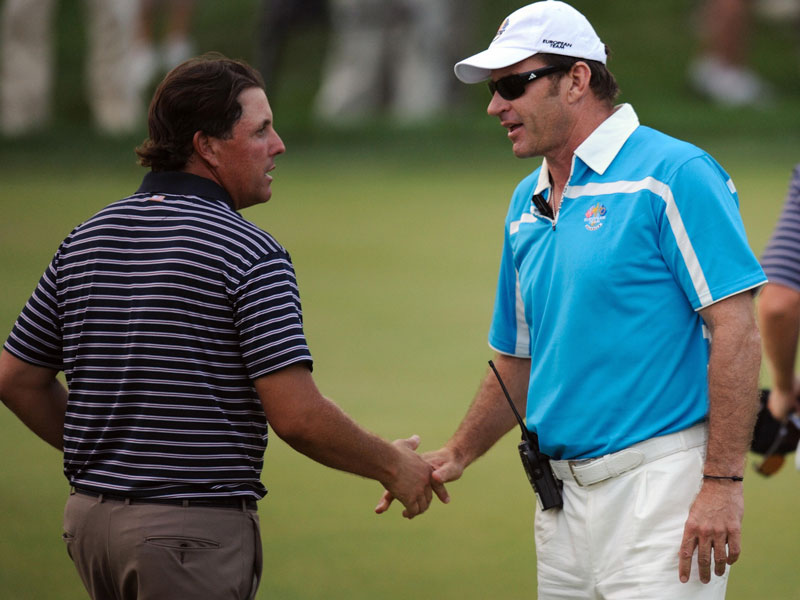 Take a look at these 10 incredible records…

Expand The Miracle of Medinah 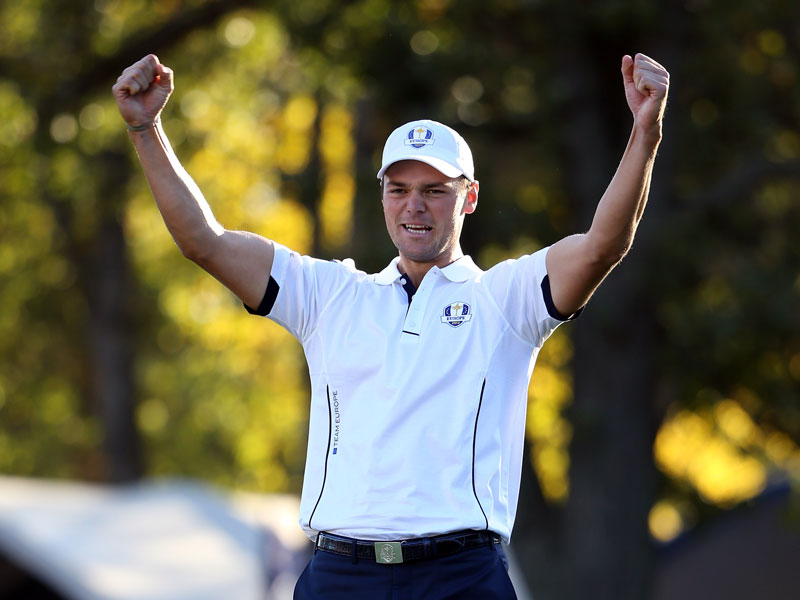 Paul Lawrie tells us about being a part…

Expand Lee Westwood: The Ryder Cup Is The Best Event in Golf 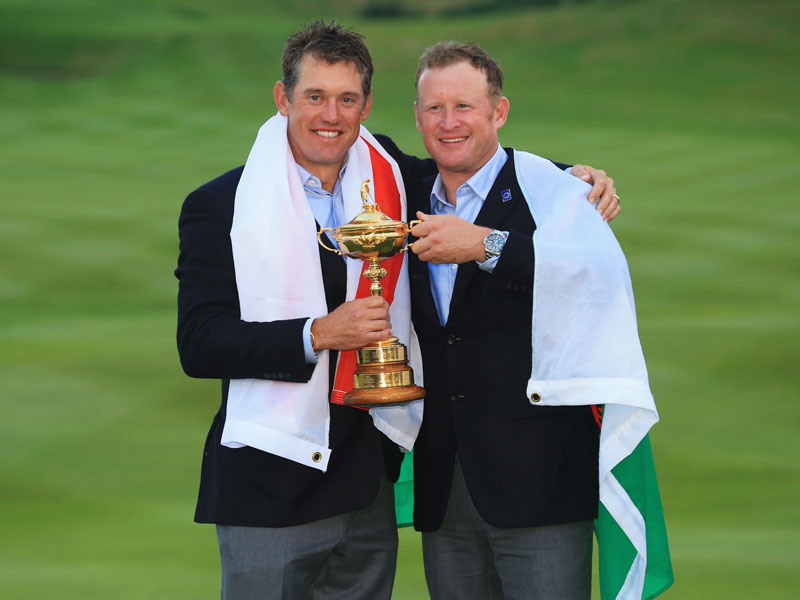 In his latest column, Westwood talks about his…

In what will go down as one of the greatest Ryder Cup matches ever Rory McIlroy and Patrick Reed went toe-to-toe all day on Sunday in 2016. Things got incredibly heated on the eighth hole when Rory holed a monster putt that would usually win the hole. Rory’s famous celebration drew a visceral response from the largely American crowd.

Reed then followed him in and waved his finger at the Irishman, which he took like a good sport. They fist bumped and Reed would eventually emerge victorious on the 18th. The US would win 17-11.

Granted, the aftermath was deplorable, but that shouldn’t detract from the quality of Justin Leonard’s putt on the 17th green. The US were four points behind heading into the singles but won the first six matches of the day. Leonard, though, was one down to Jose Maria Olazabal playing the 17th, but that would all change when he rolled in a double-breaking 55-footer to get back to all square. The US would win 14.5 to 13.5.

With the pressure at its highest, Graeme McDowell holed a 15-foot birdie putt on the 16th green to make him 2up with 2 to play against Hunter Mahan. The last match out on the Sunday and the scores tied at 13.5 points each, the pressure was incredible and McDowell performed brilliantly to win the match and win the Cup back after losing in 2008.

Christy O’Connor Jnr and Fred Couples were all square after 17 holes of their singles match. Both found the 18th fairway, but O’Connor had 240 yards to the hole, some 100 yards behind Couples. No matter. He hit the 2-iron of his life, his ball landing on the front of the green and settling some four feet from the cup. Couples half-shanked his approach and ultimately conceded O’Connor’s putt. The 2-iron was later auctioned and raised £50,000 for a Galway hospital.

In what would be the pivotal match in the Sunday singles in 2014, Jamie Donaldson stuck a pitching wedge to within inches to all but seal the Ryder Cup for Europe. The putt was given and he had sealed a 5 & 3 victory over Keegan Bradley. Final score 16.5-11.5.