WE’RE still recovering from a riveting, end-to-end Manchester derby, but there’s no time to draw breath just yet.

It’s almost time for the second instalment of Friday Night Football – with old rivals Chelsea and Liverpool taking to the Stamford Bridge turf.

After the heated era in the mid-late 00s, where the Blues and Reds faced off seemingly every week in the league, cup and Champions League - did someone say 'Ghost Goal'? - things have simmered down a tad these days.

That said, Chelsea v Liverpool is always a game both sides are desperate to win - with Antonio Conte and Jurgen Klopp set to go head-to-head.

Ahead of the big game, SunSport run down the best combined XI from the present-day teams... But, please note, only players fit and eligible to play on Friday night will be considered... 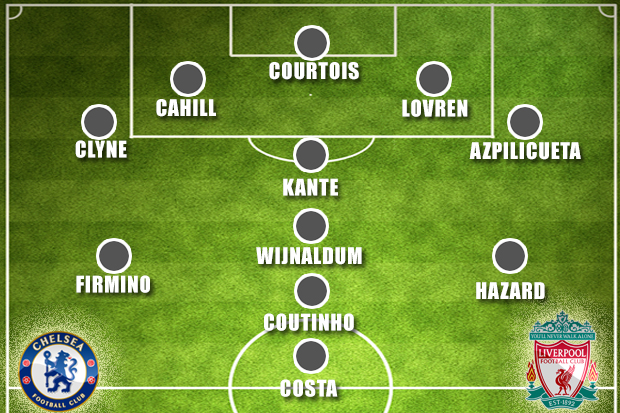 When is David Haye vs Tony Bellew, what TV channel is it on and what are the latest odds?

UFC 209 Woodley vs Thompson: Who is on the fight card, what time is it and what channel is it on?

David Haye vs Tony Bellew LIVE BLOG: Follow all the latest build-up and news ahead of the mouthwatering British boxing blocbuster

What TV channel is Leicester vs Liverpool on, what time is kick off and what is the latest team news?

THE goalkeeper spot is arguably the easiest of the lot - with Chelsea's Courtois getting the nod.

The Belgian No1 is one of the best on the planet and is easily the top option over Simon Mignolet and Loris Karius, who is still working his way back to full fitness after breaking his hand.

A TRICKY choice in separating Liverpool's Clyne and Branislav Ivanovic, it was the England man who made the cut.

The full-back is one of the best creators in his position this season, while Ivanovic has been past his best since the 2014-15 campaign.

IT'S another England man making the XI, with Gary Cahill taking the first centre-back spot.

The Chelsea man has been an ever-present in the Blues line-up in recent years and provides an experienced head in the heart of the back four.

WHILE a controversial pick, there is logic behind picking Lovren alongside Cahill in defence.

With John Terry ruled out of the match, there was a spot left open in the XI, with Lovren getting the nod as he has been the Reds' most consistent centre-back this term.

Klopp has played musical chairs somewhat with his back four this season, with Ragnar Klavan, Joel Matip and Lucas Leiva all also playing that role this term - but it's Lovren who makes the grade, here.

WELL, it was the man known as 'Dave', Alberto Moreno or James Milner.

Enough said, really... Azpilicueta is in.

ONE of the stand-out performers during Leicester's famous Premier League-winning campaign, Kante is an easy choice to slot in just ahead of the back four.

Kante will run and run and run for the team, while distributing the ball efficiently to more creatives stars... The sort of player every XI needs.

ANOTHER tough choice here in the middle of the park, it's Wijnaldum who gets the berth.

With Cesc Fabregas, James Milner and a statistically superb Jordan Henderson among others in the running, Wijnaldum gets the nod as he would complement Kante best.

He is a hard-worker, good creator and is more than happy to run into the attacking third... A more than handy option.

HE'S been deployed all over the attacking spots since joining Liverpool last summer, but Firmino can thrive playing just off a lone striker.

The Brazilian has been in sublime form since January, continuing his charge this season, including a brace against champions Leicester; he gets our vote of Willian or Oscar.

AFTER a poor 2015-16 season by his standards, Hazard looks back to his best after a solid summer with Belgium at Euro 2016.

Hazard's ability to run at defenders, cause havoc and cut inside from the left is a lethal weapon in any team.

SKILL on the ball, solid passing, an ability and desire to charge at defenders and a lethal right foot on him, the Brazilian is one of the first names on the team-sheet.

Combining Coutinho with Firmino and Hazard would be arguably the most lethal attacking midfield combination in England - and not streets away from some of Europe's finest, either.

ON his day, Daniel Sturridge could easily trouble this list, but as it is, boss Klopp is unconvinced regarding the ability and longevity of Studge.

Meanwhile, the German boss claimed Costa is 'world class'... So there's our decision made for us.

Klopp said of Costa: "He is a real warrior on the pitch. He uses his body all the time and that is a quality. He was nearly unstoppable against Swansea.

"He is world class and that's the best thing football fans can say about you."

Costa and Batshuayi goals give Chelsea 2-1 win at Watford