But the main cog in that machine, the one who made it work, was Kante.

He affected the Foxes defensively and going forward. Losing him to Chelsea has had a huge impact.

Last season most teams, whatever their starting formation, more often than not played with one striker and a No 10 playing off him. 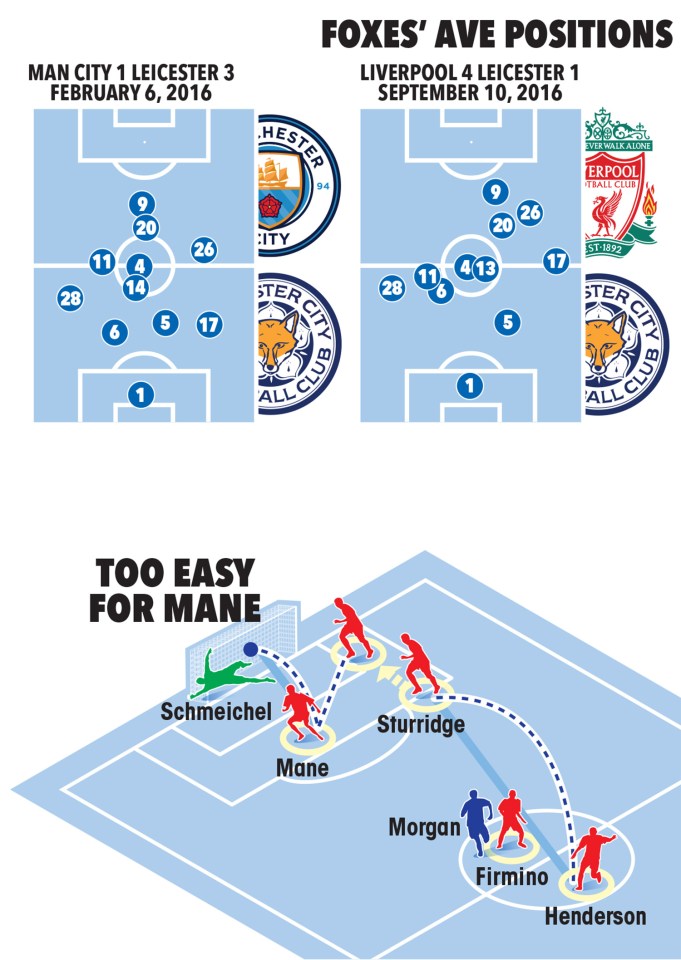 Manchester City could use David Silva or Kevin De Bruyne, it was frequently Mesut Ozil at Arsenal, Juan Mata at United, Philippe Coutinho for Liverpool and

And when those teams played the Foxes, as soon as the No 10 dropped off into the space between their defensive line and midfield, Kante was instantly on him, like a rash.

With Kante, Leicester were able to sit deeper when the opposition had the ball. He was their insurance policy, the ball-winner and that shape meant they were in a better position to counter-attack because it stretched the pitch more.

They could drop the back four closer to their own goal, with Kante in front of the defence.

Apart from Vardy, who was free, the rest of the team dropped too, so they could spring from deeper into areas the other team had left open.

They played so deep it enticed the opposition full-backs forward. When Leicester won the ball, Vardy was away into the space they had vacated, forcing the centre-backs out of their comfort zone, which is the width of the penalty box.

Without him, Leicester have been hurt defensively and as a counter-attacking unit.

What TV channel is Sunderland vs West Ham on, what time is kick off and what is the latest team news?

What TV channel is Swansea vs Manchester City on, what time is kick-off and what is the latest team news?

What TV channel is Watford vs Swansea City on, what time is kick-off and what is the latest team news?

What TV channel is Crystal Palace vs Leicester City on, what time is kick-off and what is the latest team news?

Tottenham vs Bournemouth: Harry Kane and Victor Wanyama to return along with Kyle Walker

What TV channel is Tottenham vs Bournemouth on, what time is kick-off and what is the latest team news?

Yes, Claudio Ranieri has been unlucky. In the game with Arsenal, Nampalys Mendy played in that role and was very effective.

But he got injured — going off after 53 minutes — and while Daniel Amartey is trying to fill the position, it’s a steep learning curve for a young player.

Instead of being able to let Kante (right) take care of the opposition No 10, one of the centre-backs is being dragged into midfield.

As soon as that happens, depending on whether it’s Robert Huth or Wes Morgan who goes, there is a big space between either the left-back and the remaining centre-half, or him and the right-back.

If any centre-back is honest, they will admit that 70 per cent of the centre-forwards are quicker than them you so you always want to have that insurance. If the ball goes in behind you, then you want a headstart in the foot race, or hope that it will run through to the keeper.

Last year, Leicester could defend in a 4-1-4-1 but until they solve the problem caused by Kante leaving, Huth or Morgan is having to go into that area.

That has the knock-on effect of dragging the rest of the defence higher up the pitch because they don’t want to leave a gap for the 10 — but that creates more space in behind.

Yes, they played well in beating Brugge 3-0 on Wednesday. That was the Leicester of last season.

But in the Premier League last term, they didn’t lose their second game until Boxing Day. This time, they’ve lost two out of four.

Ranieri has made it clear he doesn’t want his side to change the way they play. But I think the signing of Islam Slimani suggests they will.

He is an upgrade on Leonardo Ulloa and Shinji Okazaki and the outlet for them to counter-attack differently, as opponents are dropping deeper against them.

Instead of trying to get Vardy in behind, they can use Slimani as the focal point and then get runners off him.

Ranieri has talked about having an ‘RAF’ because Vardy and Ahmed Musa are flying machines.

They also have a different threat in terms of long throws from both sides, with Luiz Hernandez on the right able to deliver into the box as well as Christian Fuchs on the left.

But even so, they need to start playing more like last season. That triangle of Huth, Morgan and Kante was pivotal to their approach.

Mendy was looking good against Arsenal and the sooner he is back, the better.

Until then, Amartey has to get up to speed quickly, not just positionally but in his relationship with Huth and Morgan.
@higginbotham05