THIS was supposed to be the season Inter Milan finally challenge Juventus once again.

But just three league games in and Frank de Boer — who has been in charge for exactly 39 days — is already under pressure.

Sections of the Italian media have gone as far as linking ex-England and AC Milan boss, Fabio Capello, with the Nerazzurri role.

Juve are red-hot favourites to win a record sixth-straight Scudetto after romping to victory last season.

Max Allegri’s men are in staggeringly good form in Serie A.

After a slow start their fourth title defence saw them pick up just 12 points from their first ten games after suffering four defeats. 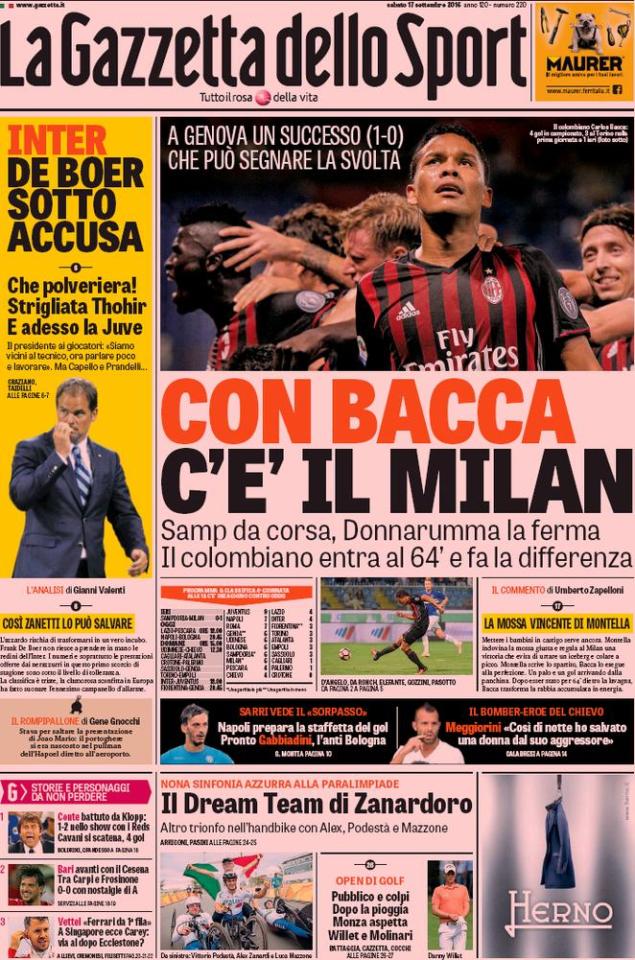 However, they came back like a train and have now won 19 of their last 21 games.

It’s going to take something special to stop the Scudetto badge ending up on Juventus’ kit again next season.

But a wealthy Chinese bringing in the well-thought-of De Boer as manager as well as big-money signings Andrea Candreva (£19million), Joao Mario (£38.6m) and beating off major competition for Gabriel Barbosa (£25m) could be considered something special.

Despite this contest being known as Il Derby d’Italia the pair have only been direct title rivals on one occasion since Ronaldo and Alessandro Del Piero were the poster boys in 1997-98.

On that occasion, Juventus finished five points ahead of their Milanese rivals.

Four years later, Inter looked set end their 13-year wait for a Scudetto when they went into the final day of the season with a one-point lead of the Bianconeri.

However, despite boasting a red-hot Ronaldo who had netted seven in ten since returning from a long injury lay-off, collapsed to a 4-2 defeat at Lazio and finished the day in THIRD place.

Inter did finally get their hand back on the title after Juventus’ relegation for match-fixing gave them a clear run.

Under first Roberto Mancini and then Jose Mourinho, the Nerazzurri won five league titles in a row — with the first handed to them as part of Juve’s punishment.

Inter looked on course to break their league duck last season as they took advantage of the champions’ difficult start to go top on Christmas Day.

However, they completely fell apart in the new year and finished outside the Champions League places.

A summer upheaval was supposed to bring with it the prospect of a genuine title challenge.

However, a defeat, lucky draw and a last-gasp victory in Inter’s opening three games — coupled with a humiliating Europa League defeat at home to Hapoel Be’er Sheva — has done little to promote that notion.

Juventus, meanwhile, have looked solid as they started their latest defence as the only team with a 100 per cent record.

New signing Gonzalo Higuain has shown the weight of his £75.3m fee is not weighing heavy with three goals so far.

While Mauro Icardi has scored the same amount — with all three earning the club points.

A first victory over Juventus at the San Siro for six years would be a real statement by Inter.