17.56: Shall we declare football the winner? Triffic. Well that’s all from us this afternoon. I’m off to patch up my bleeding fingertips. But join us back here midweek for live coverage of all the Champions League action. Meanwhile, check out the highlights of this afternoon’s firecracker on the GOALS app. See ya!

17.53: Scintillating stuff. An absolutely bonkers game! Chelsea should have won it by half time but Swansea stormed back in that second half and could so easily have won it. It all means there’s daylight at the top of the table as Chelsea go up to second but now two points behind Man City.

17.50: Swansea want a penalty as Fabregas appears to haul down Ki in the box. Nowt doing says Mr Marriner. And replays show he’s bang on with that decision. So much is going on, my fingers are bloodied stumps. What a second half this has been! Astonishing.

17.47: Swansea are on the break before Hazard cynically wipes out Barrow. He’s the last man 45 yards out, he’s surely got to see red! But no, the Chelsea man only gets a booking. Work that one out. Four minutes of added time. Just time for Costa to notch his hat-trick

17.45: CHANCE! Fer has a shot blocked before Conte decides to go for all three points, bringing on Batshuayi for Oscar with five minutes left.

17.44: In the middle of all this madness, there’s Olympic gold medal boxer Nicola Adams calmly wandering down the wing. Actually, hang on, my mistake, it’s Victor Moses. As you were.

17.43: This is end to end madness as first Swansea break but Naughton’s cross is pouched by Courtois. Then Chelsea storm up the other end only for Fabianski to beat out a thumper from Costa who’s looking for his hat-trick. What a game! Utterly breathless stuff

17.38″ GOOOOAALLLLL!!! SWANSEA 2 CHELSEA 2. Costa acrobatically hooks in a loose ball after Ivanovic’s rasper had looped into the air. What a last ten minutes we’re in for now!

17.35: Couple of half chances for Chelsea as Hazard stands a ball up to the back post where Naughton heads clear as Costa steams into the back of him and then Oscar drags a shot wide of the the far post. How the effin jeffin are Chelsea losing this game? They were absolutely bossing it but Swansea have scored with their only two efforts on target!

17.33: Chelsea have got 15 minutes to pull this out of the fire as Conte makes a double switch with Moses and Fabregas replacing Matic and Willian

2:10 – There were just two minutes & 10 seconds between Swansea's two goals in this match against Chelsea. Turnaround.

17.31: By the way, replays show that Costa made a meal (coffee, brandies and cigars) out of that Fabianski challenge. So by rights, that should have been a second yellow for diving!

17.24: SAVE! Hazard then fires a ripsnorter that’s arrowing into the top corner before the flying Fabianksi fingertips it away. What a game this has turned int!. All it needs is David Luiz to come on and add a bit of slapstick comedy to proceedings.

17.22: And now it’s Fabianski with a touch of the Bravos as he comes racing out of his box to nick the ball off Hazard and then upends Costa in the race for the loose ball! Chelsea are adamant that it’s a red card for the keeper but the ref waves play on. Utter bedlam in the stadium!

Gary Cahill gets caught in two minds – Barry and Paul Chuckle’s by the looks of it. Thinking about a passback, he’s robbed by Leroy Fer who advances to poke it past Courtois. What a turnaround! What a game!

17.17: What is it with keepers this weekend? It’s like they’ve seen Bravo and thought, ‘Yeah I fancy myself as an outfield player!’

GOOOOAAALLL!!!! SWANSEA 1 CHELSEA 1. Sigurdson lashes it down the middle and somehow the Swans are level!

17.15: PENALTY TO SWANSEA!! Courtois does a Bravo and comes racing off his line and upends Sigurdson!

17.13: Amat goes through the back of Ivanovic and that’s surely a second yellow for the Swansea defender. Incredibly, Andre Marriner decides a word of warning is enough. Shocking.

17.10: Meanwhile on the touchline, Antonio Conte is doing his absolute nut at the treatment his centre forward is getting. Don’t know about you but I liked him so much more when he was dry humping dugouts at the Euros.

17.08: Costa’s every touch is being roundly booed but here he goes again, off on a mazy run before being blatantly tripped. I absolutely guarantee that Costa will score the killer second goal. Absolutely nailed on.

17.05: Chelsea straight on the front foot as Willian cuts in from the right and unleashes a cross shot that just eludes Hazard at the back post sliding in like a big slidey thing. In other news, Amat takes a yellow for coming through the back of Costa who once again goes to ground like someone’s clanged him across the back of the head with a shovel. The wuss.

17.04: You know John Lewis’s ‘Man on the Moon’ from their Christmas ad? Here’s what he does the rest of the year… 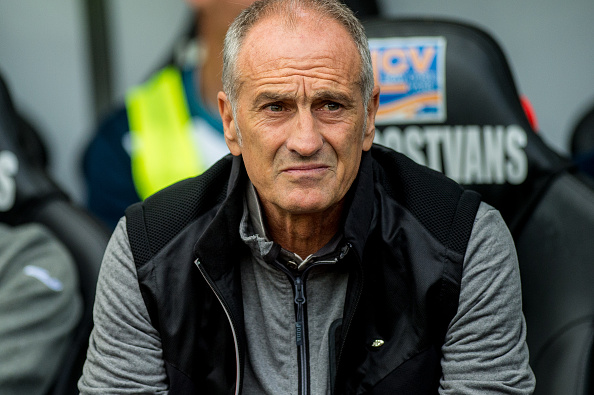 16.53: Chelsea in full command and really this game should be over already. As for Diego Costa, he’s scored one, missed an absolute sitter, been booked for a nasty foul, bought about four fouls, stomped around looking like Lord Sugar’s angry ballbag and generally p***ed the home crowd off. Top notch centre forward skullduggery!

16.45: Swansea make a sub, wheeling on Barrow for Neil Taylor who looks none too pleased about the tactical switch.

16.42: Costa then gets booked for, well, for being Diego Costa. That and the fact he slid in late on Fer. Then much to the glee of the crowd, the pantomime villain somehow misses from a yard out, sidefooting wide of the goal when it seemed easier to score. Absolute stinker!

16.40: Five minutes to half time and if Swansea can get to the break only 0-1 down they’ll have had a right result. Hang on, here’s Sigurdson whipping in a dangerous strike that flies inches wide. The first decent chance they’ve had

16.34: SAVE! Azipilicueta raids into the box and leathers a near post shot that forces Fabianski to make a smart stop low down. Chelsea looking to score at will here.

16.32: Swansea just can’t get into this. Chelsea look in imperious form and are utterly bossing the game with Hazard and Kante pulling all the strings. I’m telling you, they’re going to win the title this year.

16.27: Leroy Fer gets the first yellow card of the afternoon for a late lunge on man baby Costa who rolls around like he’s been shot. Death by ankle tap.

16.24: Eden Hazard really looks fired up this afternoon. Wonder if he’s had another run in with a portly ballboy?

6 – Diego Costa has now scored six goals in four Premier League appearances against Swansea; more than versus any other opponent. Menace.

16.20: CHANCE! It’s almost two as Hazard storms into the box and thunks a low shot that Fabianski does brilliantly to save with his feet. Swansea are rocking like Kell Brook here. This could get ugly.

Oscar wins the ball, squares it to Costa lurking just inside the box and the big fella calmly batters it first time into the corner. Did you back him as first scorer like I told you?

16.15: Good to see David Luiz back isn’t it? Chelsea have lacked a level of headless chickenry in their back four since he left. Can’t wait for him to come on and give us plenty of yuks and giggles 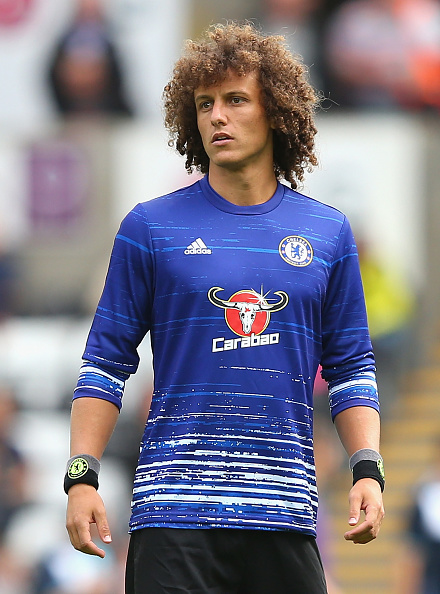 16.11: Willian is already causing Swansea all sorts of problems down the right, this time fizzing a low cross into the six yard box that Fabianski does brilliantly to get down and hold with Costa lurking.

16.09: Leroy Fer commits a daft and needless foul on Ivanovic five yards outside the box. This remember, a man who once thought he could keep the horse he bought for his girlfriend in their flat. Not the sharpest tool in the box is Leroy. Anyway, he’s lucky as Chelsea duff the resulting free-kick.

16.05: It’s a bright, open start from both sides as Willian stings the palms of Fabianski with a 20 yard rasper. Too hot to handle, that one.

16.03: Two minutes on the clock and wouldn’t you know it, Diego Costa’s writhing on the floor after Amat disturbed the air around his ears. Get up, man! You’re an embarrassment.

16.02: FACT ME! The Swans have conceded more goals (21) against Chelsea than any other Premier League side.

15.57: So what do we reckon this afternoon? Hard to see anything other than a Chelsea victory. I’m going for a 3-1 win for the Blues. With all eyes on the Manchester clubs, I’m also tipping them to sneak up and win the title this year. With no European distractions for them, it’s nailed on.

15.55: If you’re having a cheeky punt with Sun Bets on this afternoon’s first scorer, consider this. Diego Costa has scored five Premier League goals against Swansea, more than he has managed against any other side.

15.54: Worth bearing in mind that Antonio Conte was unbeaten as a manager against Francesco Guidolin in their Serie A meetings (W6, D1).

15.52: Poor Guido looks like the mad old bloke next door who’d only throw your ball back after he’d punctured it

15.50: Mind you, Swansea boss Francesco Guidolin’s no stranger to a bit of topless modeling himself… 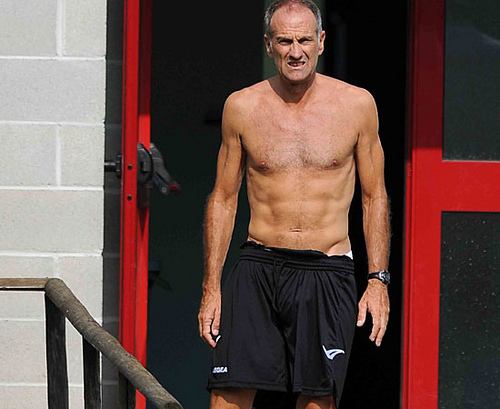 15.46: Did you read in the Sun this morning that Jose is rumoured to be packing down below? Well I can confirm, Antonio Conte’s not exactly carrying a salted snail either. Unless that’s where he keeps his Cornettos… 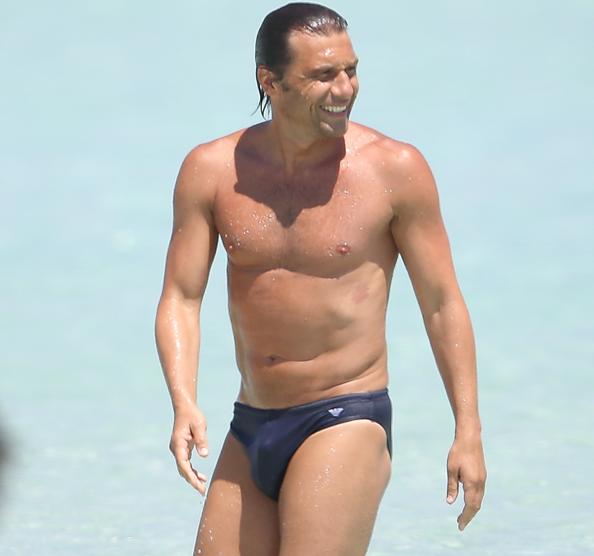 15.40: Chelsea stick with the same side that beat Burnley which means there’s no place in the starting line up for David Luiz and let me tell you, he doesn’t look very happy about it… 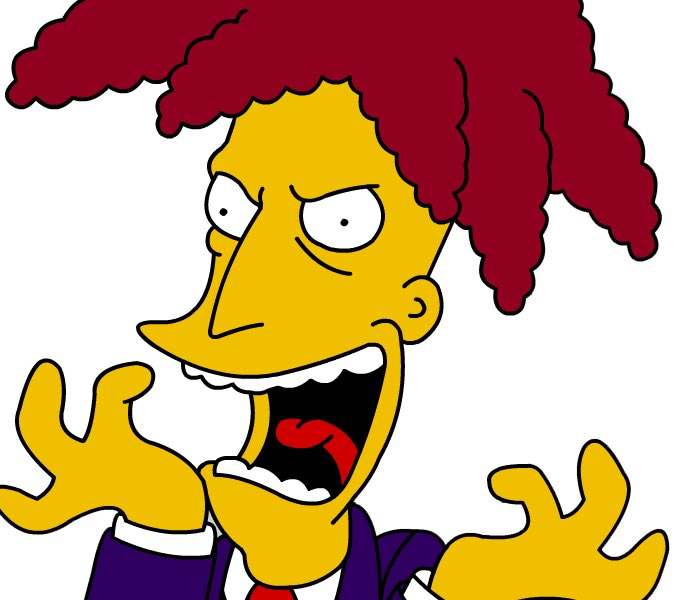 15.35: Welcome to the Liberty for what promises to be a humdinger of a Premier League match between Swansea v Chelsea. Let’s get straight to the team news…